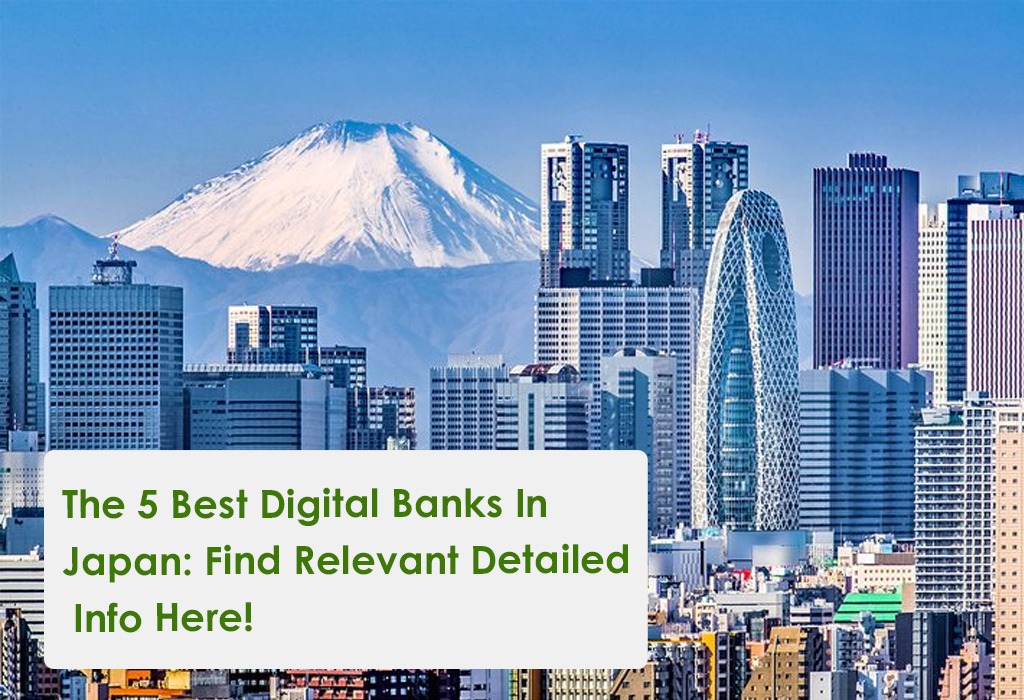 As the demand for digital-only banks is increasing, almost all the nation of the world is trying their hands at it. Digital banking was a new concept 5 years earlier but it came into the mainstream now. People from all corners of the world are becoming interested in using digital-only banks because of their easy usage and low cost. Where every nation is building virtual bank facilities, Japan is not exceptional too. However, the growth of multi-digital banks is still on count here. To make you aware, we would be talking about ‘The 5 Best Digital Banks In Japan’ So let’s get started!

Japan has been ahead in technology and they have proved it with so many new inventions as well. But, like in other nations: the USA and the UK, the growth and expansion of mobile banking in Japan is slow. Here, there are three major digital banks that are: Sumitomo Mitsui Banking, MUFG Bank, and Mizuho Bank, which remain at the top, and the rest banks are not preferred by people that much.

If we talk about the digital banking starting point, the concept of virtual banking took fire after 2019 in Japan and people adopted it with so much interest.

Also, Japan is lacking in a fully independent digital banking system; however, it is generally backed by established companies or brands. Due to this, the operations and decisions about digital banks face issues in one way or another.

Although the race between several neo banks has been for years, many of them couldn’t come out of it.

Currently, there is around 200 digital bank license of which 100 are major banks, 30 banks are major, and around 55 banks are the foreign bank. Some banks are:

Jibun was founded in 2008 and is a conglomeration between KDDI Corporation: a Japanese communication company and The Bank of Tokyo Mitsubishi.

In the list of The 5 Best Digital Banks In Japan, Jibun Bank is put at the top. The best part of Jibun bank is that it launched the first digital app for online banking in Japan. Since the beginning, the target people were the Y generation for Jibun, who were having mobile phones and used them for their primary work.

Jibun also takes care of the facilities or services and therefore provide all kinds of services: Loan, investing in stocks, deposit option, and many others.

Minna Bank, which means “A bank for everyone” is famous in Japan. This bank is also backed by others and this enterprise is Fukuoka Financial Group: the largest regional financial group.

Apart from this, Minna bank got a banking license in 2020 and it started functioning from the end of 2021. It’s also the first digital bank to issue eKYC for customers.

On Minna Bank, you can get budgeting and analytics tools, overdraft protection, cashback, and many others.

Kyas was founded in 2015 by Shinichi Takatori and is created on a proprietary banking system, not a turn-key system.

Kyash does not hold any digital banking license; however, it has applied for many licenses that help them to provide additional services. Kyash also provides prepaid Visa debit cards and ATM withdrawals at Seven Banks ATMs.

Along with that, people can get analytical tools to get information on the money spent. Similarly, the app is designed in a modern way where users could be fantasized about designs, icons, and many more.

All the banks of Japan are backed by other enterprises and PayPay is no exception here. It is a combined effort of Yahoo Japan and the famed SoftBank Group.

Talking about growth, PayPay Bank has gained popularity within 3 years of its launching having more than 38 million users. The benefits of using PayPal include mortgage loans, no withdrawal deposit fees, foreign currency deposits, and investments that start from YPJ500.

Also, those who are having sole business could make it PayPay an option to excel in their business. It provides VISA debit cards, business loans, free sales deposits, etc.

Those who are into sole businesses find it easy to get their account opened here, while it needs to send mail in business account opening.

If it is told to you that a bank has won the “Global Finance” award in Japan, would it not attract you to it? Surely it will!

Rakuten is popular in terms of creating accounts in Japan. It has more than 11 million accounts which are the largest of its kind. But, this was never done so early; however, it took almost 20 years.

Back in 2001, Rakuten started its digital banking services with a strong aim of achieving the best in terms of providing next-level services. And, it completed it with an abundance of services.

Rakuten stands for providing all sorts of services that a digital bank should have. From loans and direct deposits, to debit cards and others; everything is there on Rakuten.

This is why Rakuten is chosen by huge Japanese and this is something they want to make primary for their financial acts.

“Digital” or “Internet age” is like never happened occasion to make things easily done. With digitalization, things like financial acts, management, and many other fields become easy to deal with, manage, operate and supervise.

Coming back to digital banking, with this, users found utmost ease to open a bank account and comparatively less effort put in for doing bank work.

Digital banking benefits are numerous; however, we have put them in points for quick understanding.

Digital banks are accessible round the clock because them being online. This is something become necessary for people to reach out to their online bank accounts anytime they want to.

This helps in making payments at any time from anywhere.

Account opening is simple and could be done without giving any extra fee for it. Opening an account is one of the hectic tasks which you can do right from your home, on your mobile phone.

The list of benefits is innumerable; however, we have given here a few to give you a gist of it.

In the era of virtual banks, every nation is shifting its financial services online to make them accessible, and Japan is there too in the quo. Japan, which is also known for its technological advancement, has adopted a digital banking system, but with little less popularity. And the reason for that is, In Japan, there are no individually made digital banks; all created with the support of enterprises, companies, etc.

However, Japan has got 200 digital bank licenses which include all home banks and foreign banking services as well.

Choosing one of the banks from the list is worth it because of the deep research put in there.

Hope this post regarding ‘The 5 Best Digital Banks In Japan’ has added some value to your life because that’s what we are committed to.

Leave your doubts and be shy not to ask questions, if you have any!